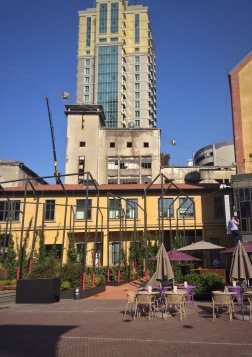 Sometime during the years leading up to 2015, a certain pilsner holding – that shall not be mentioned – in part sponsored the renovation, reconstruction and reorganization of Bomonti’s former beer factory in Feriköy. As the neighbourhood slowly gentrified over the years, the factory is located under the sky-scraping shadows of Hiltons, Anthills and Divans. *cough* connection *cough* Rather than renovating itself to its original state, the factory launched it self under a new guise: Bomontiada. Today, it holds a concert venue, several restaurant-bars, and alternative spaces. True to its name, the venue is a virtual island (ada). Walking to and through the former factory is an experience in itself. Although Bomontiada takes up quite a bit of space, there’s only one entrance that faces daunting silo-looking towers – still out of use. While its exterior may not be the most welcoming, Bomontiada’s courtyard is filled with life.

For the first year or so since opening, Bomontiada was host to a few venues, the most popular of which was its concert hall: Babylon, a cousin of the Asmalımescit and Kilyos branches. Alongside the concert hall, were several other progressive spaces like Alt, their very own art gallery, and Atölye Istanbul, a communal working space (a sort of trans-disciplinary studio).

These are all welcomed and innovative spaces that had been missing from Istanbul’s landscape for long enough. While these are all great, we are actually excited about the restaurants that opened early in 2016 – finally. And, what’s even more thrilling is that they are fantastic.

After security, you’ll find Kilimanjaro across the courtyard. This is just one of the many delightful (and sexy) restaurants that opened this year. It has a #newanatoliankitchen feel to it with great cocktails. To the right of the entrance is Kiva, the debated offshoot of Çiya, sporting their forgotten Anatolian recipes. To the right of the entrance, Monochrome (the latest addition) offers great third wave coffee stylings with the desserts and sweets to match. At the far end of the courtyard you’ll see Populist, one of the few bars toting their own brews. Finally, across the hall from Babylon hall is Delimonti (one of our favourites). As the name suggests, this is a deli sporting an enormous counter filled with regional Turkish cheeses, some of which we’ve never heard of. What’s even better is that it’s a wine bar (and reasonably priced, too).

Next time you find yourself a little hungry, even if you’re only a little peckish, head over to Bomontiada. These places are great for casual or intimate meals, but if you are a group, we suggest you reserve places as these venues have become popular for the after-work/classes crowds.