Wine is tricky. Which is partly why this author was hesitant about writing about it. Unlike food, wine consumption has its own set of guidelines and protocols. And this is just one of the many reasons it has adopted an aloof character over the years. Luckily, in more recent years wine has developed into a more welcoming industry; there is no wrong taste bud.

Turkish wines have a terrible reputation. And, honestly, it’s not for nothing. For years, wineries and vineyards in Turkey would try their best to imitate “old world wines” at the cheapest cost. The results usually involved waking up with a baffling headache and thinking, “But I only had two glasses.” 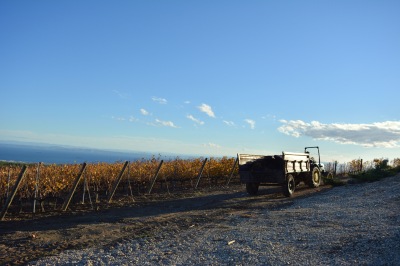 Catching on to the many Slow Food factions around the world, Turkey, too, took an
interest in good practices and good productions. The few wine houses of Turkey turned into many boutique vineyards producing decent to spectacular wine. This in turn, led to great and long overdue discussions of today’s Turkish wines.

It also led to more interest in possible local varieties. And, as it turned out, some Turkish regions are homes to several varieties that are, in fact, older than “old world wines.” Today, several vineyards
are celebrating (wonderfully) this renaissance of Turkish regional grapes. Others have focused more on impeccable production with European grapes. One such vineyard is Chateau Kalpak, producing only red wines of Bordeaux blends (Cabarnet Sauvignon, Cabarnet Franc, Merlot, and Petit Verdot).

Approximately a four-hour drive from Istanbul, Chateau Kalpak tops the slopes of Marmara’s Şarkoy region. And, in it sits its equally outgoing, yet elusive managing owner, Bülent Kalpaklıoğlu. We were lucky enough to visit last month and even luckier that Bülent Bey joined – guided – our tour. 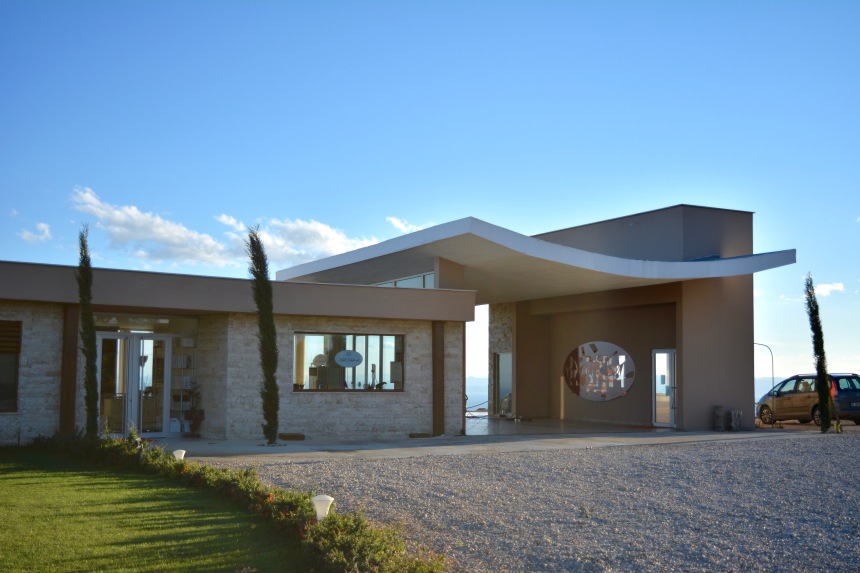 The Chateau sits on top a small hill; nothing but blue waters from the east to the south and to the west floats a couple of Greek islands. Immediately below us stood the beautiful rows of aging wine grapes. Standing on their terrace, dumbly gapping at the view. Our first lovely guide-cum-food engineer, Gamze, greeted us first by introducing herself, then by explaining that we were actually standing on an integral platform. Lifting what we thought were decorative stones, we quickly learnt there was nothing aesthetic about it. The “stones” were essentially large plugs for wide pipes that led to the brewery below. The point of this set up, she explained, was so that after the harvest and a very careful de-stemming process, the grapes are easily put into these shoots and essentially left to macerate and compress on their own. 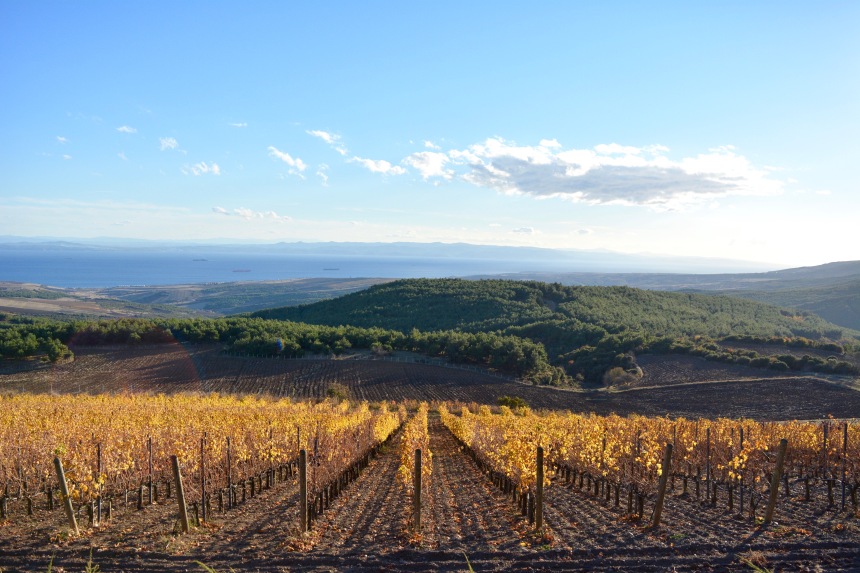 This theme of minimal interventional seems to pop up at nearly every step during the Kalpak winemaking process.

Our guide led us downstairs where the sounds of rolling metal equipment was only lightly masked by a speakers-blasting Beethoven. Oddly, the sounds of the production were complemented perfectly with its scents. With the rolling metal came the sweet smell of fermenting grapes. And, the Beethoven was accompanied by large modernist surreal artwork. Our jaws dropped some more. If the view didn’t do us in, the smell certainly did. The room was filled with gargantuan metal tanks to one side and equally large wood oak to another. Weaving through the forest of tanks was a group of

large men wheeling around what looked like a basket press – a manual batch press system used before the advent of better wine technology.
As we moved on, we were joined by the owner and overseer of all things Kalpak, Bülent bey. Here, we realized just how involved in every step this man was. And consequently, why the wine house was owner of some ten gold and silver medals (and that was just 2015).

Sitting in front of the glass-chambered cellar (we unfortunately, weren’t able to move into the VIP section of the tour, you might have better luck), Kalpaklıoğlu explained that after a career outside of Turkey, he came back to his mother country a retired, but restless man. And so, he started scouting locations for wine crops and wine making, planting his first grapes during the 1990s. It was only some 20 years later that the grapes were actually harvested for wine. He pointed to the wood caskets of the cellar. “I waited because I needed the grapes to be at their pique.” And instead of ordering oak barrels from France or the United States, he explained that he went searching through the forests of Hungary, toasting, smelling and tasting the trees. He was looking for the perfect specimen. The species of tree whose aroma and taste were just right to complement the flavor notes of his grapes, rather then overpower them. More jaw dropping. Here, again we see an attempt to intervene as a little as possible with the grapes and their natural fermenting process.

Kalpaklıoğlu ended our tour by speaking to us a little bit about the secondary fermentations and the bulk ageing. Like every other stage of production, here too, Bülent bey is involved in a nearly obsessive, yet admirable manner. Like the back of his hand, he knew every barrel and the fermenting status of their contents. Which may not be too complicated when a vineyard ages its wine for 6-12 months – as is the norm in Turkey. Again, like every other stage of production Chateau Kalpak goes above and beyond the norm. Here the wine is aged in its casket for approximately 36 months, with two food engineers and one oenologist checking on its process every month. While every six months the barrels are emptied, cleaned, sterilized, and refilled. Another jaw drop.

We went back upstairs to the Chateau’s main reception area to find a little two-glass tasting waiting for us. As we settled ourselves, we were asked us – lightheartedly – to identify the wines in front of us. The first we tasted was full bodied with a long finish; yet light enough to be a more adventurous mouthful. The other was equally full bodied, yet worked as a crescendo, growing with complexity and depth with a similar long finish. Or, as our host playfully related, the former was like a Mozart, bouncy with its ups and downs, while the latter was like a Beethoven, somewhat somber but far more balanced. Unfortunately, while we are enthusiasts, we are not experts. Luckily, some of our friends are.