Over the past five years, chefs, food writers, and foodies alike have been mounting events with respected professionals from the field talking to and cooking with attendees. One popular example is Copenhagen’s MAD symposium spearheaded by Rene Redzepi. Another similarly global interaction is The Gelinaz, where some 40 world-renowned chefs swap kitchens for a day or two. While one is a symposium, the other is a more hands-on approach. Both, however, strive for the same thing: sharing ideas to make food better.

Up until this past year, Turkey’s only food-related gatherings of any sort were closer to competitions. And, while competitions in all forms have the potential to push creativity, it seems to me that they fall short when compared to the likes of Slow Food Istanbul (Defne Koryürek’s brain child Fikir Sahibi Damaklar) or even Omnivore Istanbul.

Now, there is another event that can join the ranks of Omnivore and MAD: Yedi Istanbul. The word yedi in Turkish points to a number of meanings, the first is seven – referring to the “seven hills” of Istanbul, the seven regions of Turkey, but most importantly, yedi is the conjugated verb to eat. The committee behind the entire operation is composed of Istanbul’s mikla and Kronotrop brain, Mehmet Gürs, food editor of Vogue Türkiye and Academy chair, Cemre Narin, and Mutfak Sanatları Akademisi (MSA) director Sitare Baras. With only two months, these three top Istanbul food innovators pulled together a series of amazing speakers both foreign and Turkish along with even better food services.

Below you’ll find our take for the first set of speakers at Yedi Istanbul. You can read about the great afternoon session in Part 2. Each brought a different perspective to the fore on how to give back – the theme for the day. Each brought with them their own stories and initiatives, from systematic and legislative approaches like those of French councillor Arash Derambarsh to some more, say, unofficial methods like Ayşe Tükrükçü’s soup distribution to the homeless. Although this was primarily a conference about food and sustainable methods, some focused more on the social aspect and possible strategies.

Yes, some talks were more captivating than others (not everyone is a natural public speaker). Echoing selflessness, if the talks taught the audience anything, it’s that helping is never out of our reach. Doing is possible.

The day started with the charismatic and charming Ronni Kahn. Speaking of both good times and bad, Kahn exuded an absolute sincerity that won over the audience almost immediately. Born in South Africa, Kahn moved to Australia in the late 1990s. With the 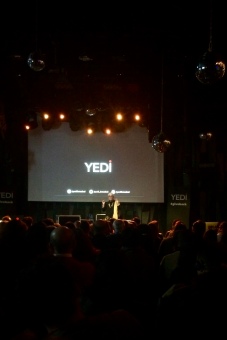 help of the national food industry, she founded OzHarvest, a not for profit initiation that collects food about to be thrown out or past their expiry-dates (but still safe and edible) and redistributes them to some 800 charities across Australia. Kahn and her team have successfully lobbied to change legislation of food waste and create sustainable plans for existing corporate social responsibilities. In 2010 she was awarded “Australia’s Local Hero.”

As the first speaker of the day, Kahn not only got our attention, but she also planted seeds of inspiration. She spoke of the importance of “today,” to focus on acting in the present rather than putting it off to a time in the nebulous future. After all, we’ve all said, “When I make some more money,” “When things settle down,” and our personal favourite “now’s not the time.” Listening to her talk was like listening to the Aldous Huxley’s myna birds; she was a reminder to focus on the here-and-now and to have compassion – certainly a theme that resonated throughout the day.

The following talk focused more on the statistical than the anecdotal. Yörük Kurtaran opened with the difficulty he had when he had to explain his day job to a new encounter. Now teaching at Istanbul’s Bilgi University (known for their workplace-integrated educational programming), Kurtaran can offer simpler answer: he is a teacher. He spent the majority of his speech discussing the myriad of different vakiflar (foundations) in Istanbul. Some of them he worked for and others he helped found such as the Sivil Toplum için Destek Vakfı (Foundation to Support Civil Society). More recently, he has focused on youth politics within civil society.

Through his talk it became clear that within a short period of time, Turkey developed initiatives and organizations whose activities were once solely the responsibility of the family. That is, today we see greater efforts to promote the community and a volunteering culture. Unfortunately, we were left a little lost and unconfident about what to do with the information. Unlike the ver clear call to action of the previous talk, Kurtaran’s was a little more ambiguous.

If you ask anyone in the food industry, they’ll recognise the name Lars Charas for crafting the concept of sustainable food systems. Charas explains that sustainability does not mean producing more food. His research documented the land that we have used over the century and, essentially, that there is no more land to farm. He echoed that a sustainability food system cannot be born from more food chains – there are quite a few of those, already. Instead Charas argued that to preserve our (and the world’s) wellbeing, we must change our diets. Only then will we be able to reap the benefits of sustainability. 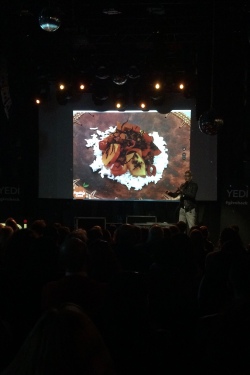 Chef and farmer, Charas believes that consumers are responsible for demanding this change. He further explains that chefs are essentially professional consumers; thus, they must be those agents to direct and develop a change in diet on a global level. And, just as he preached, he put it into practice. Charas spent the last couple of years traveling the globe researching, talking, hanging, eating, and compiling some 100 interviews and recipes that offer different consumer approaches in his recently published book, Food Forever. Charas ended his talk by introducing his concept of culinary playgrounds; areas where chefs are free to experiment and test sustainable practices. In fact, just one of those chefs is Istanbul’s famed Mehmet Gürs of mikla restaurant.

Better known for his work on film and television, Mert Firat has a surprising philanthropic off-stage reputation. The young actor explained that he’s always held an interest in issues concerning social responsibility. His talk mainly focused on those endeavours.

Along with three other trusted friends, Fırat founded “ihtiyacharitasi.org.” Literally translated as a map of necessity, that is exactly what the operation is. The organisation is a network connecting those with needs to those willing to give. And, the interface – an online map of Turkey – is simple enough for anyone to use. Anyone in Turkey can register 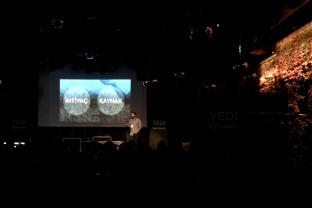 onto the site and post a need (ihtiyaç) or, alternatively, post a donation (destek) tangible or intangible alike. The post appears as a pin on an interactive map of Turkey. Click on the pin and discover who needs what, where and how many. At first, the operation was intended for individuals, but over the years the initiative has grown to include schools and small businesses.

We have seen this philosophy before, with the likes of swapping on craigslist or different Facebook groups. Here, however, the brains behind İhtiyaç Haritası created an entity that can potentially maintain itself. It’s a surprise that other countries haven’t adopted this model.

Earlier this year, a local councillor of a Parisian suburb garnered international attention from an articled being shared through social media outlets. The piece explained how Councillor Derambarsh was changing legislation to ban plastic cups and utensils. However, this wasn’t the first time Derambarsh caught our undivided attention.

On stage, the councillor explained that while he was a student he would eat his lunch in the late afternoon with the hope that it could also double for a dinner. He also explained that his was not a unique case, then, or today. Like him, students (and non-students alike) struggle to maintain a healthy and nutritious diet. Take a trip to the supermarket and you’ll see that a can of Coca-Cola is cheaper than water.

When he saw how much supermarkets were throwing out at the end of each day, he decided to do something about it. Derambarsh set out to collect as much food (that was going to end up in a dumpster), and offer it to low-income earners. And while his first attempt was successful, the chains quickly stopped giving him their garbage because of the possible (but very improbable) liability charges. Determined, the councillor fought to change policy and the following year, successfully did. Today, his team of volunteers legally collect food being tossed and offer it to families in need.

His talk also addressed the loose implications – and the commercial benefits – of the expiry dates on packaged food and the taxes returned to food and beverage companies when supermarkets dispose of their food.

His talk delved deeper than minimising waste and helping those in need. He explained that these laws and policies are, if not the same, extremely similar in each country. When he suggested that it was possible to make these kinds of changes here, many scoffed – presumably, thinking like so many, that governments, legislations and policies are untouchable entities that can only be approached by those with the right credentials.

Who can blame them?

And, as if he knew what we were thinking, he gave us an unexpected answer. It is difficult for one person to do something, but together, in solidarity, maybe we can.

Australian born Karyn Thomas spoke as if she was welcoming us into her home. She told us of her tough childhood that didn’t seem to ease up, as she grew older. After half a lifetime of struggles, she left the country and wandered the globe. She found herself living in Syria when the war broke and spent the following year or so helping refugees. But by 2012, it became clear that it was too dangerous to live in Damascus. Thomas, like so many others, made the move to Istanbul where she continues her work with Syrian refugees.

At first, she and and intermittent group of volunteers worked out of her flat in Cihangir helping anyone, with just about any problem from visa issues to prosthetic limbs. As the operation grew, Thomas and her team saw that it was necessary to narrow their focus. They bought a building in Çapa, a neighbourhood in Istanbul’s Fatih district, where Small Projects Istanbul (SPI) came to fruition. Today, the strictly volunteer-run operation offers language courses for adults as well as education programs for children to better integrate them into the Turkish system. Apart from educational initiatives and scholarships, Thomas and her team have set up a women’s craft collective that will allow participants to support themselves but also develop their skills.

On stage, Thomas told us heart warming, tragic, and hilarious stories, while her two associates (also volunteers) sat by her, gently nodded and smiled along with her. They updated us with some of the more recent initiatives like their basement canteen and running ethical tourism programs. After inviting the audience to visit the team in Çapa, they encouraged us all to lend a helping hand anywhere we could. After all, devoting your time and giving back (to anyone really) may be challenging, but it is far more rewarding. And if Thomas was not gently ushered off the stage, half the audience would have signed up on the spot.

Read about the great afternoon session and initiatives in Part 2.